Will Teather – The Age of Panic 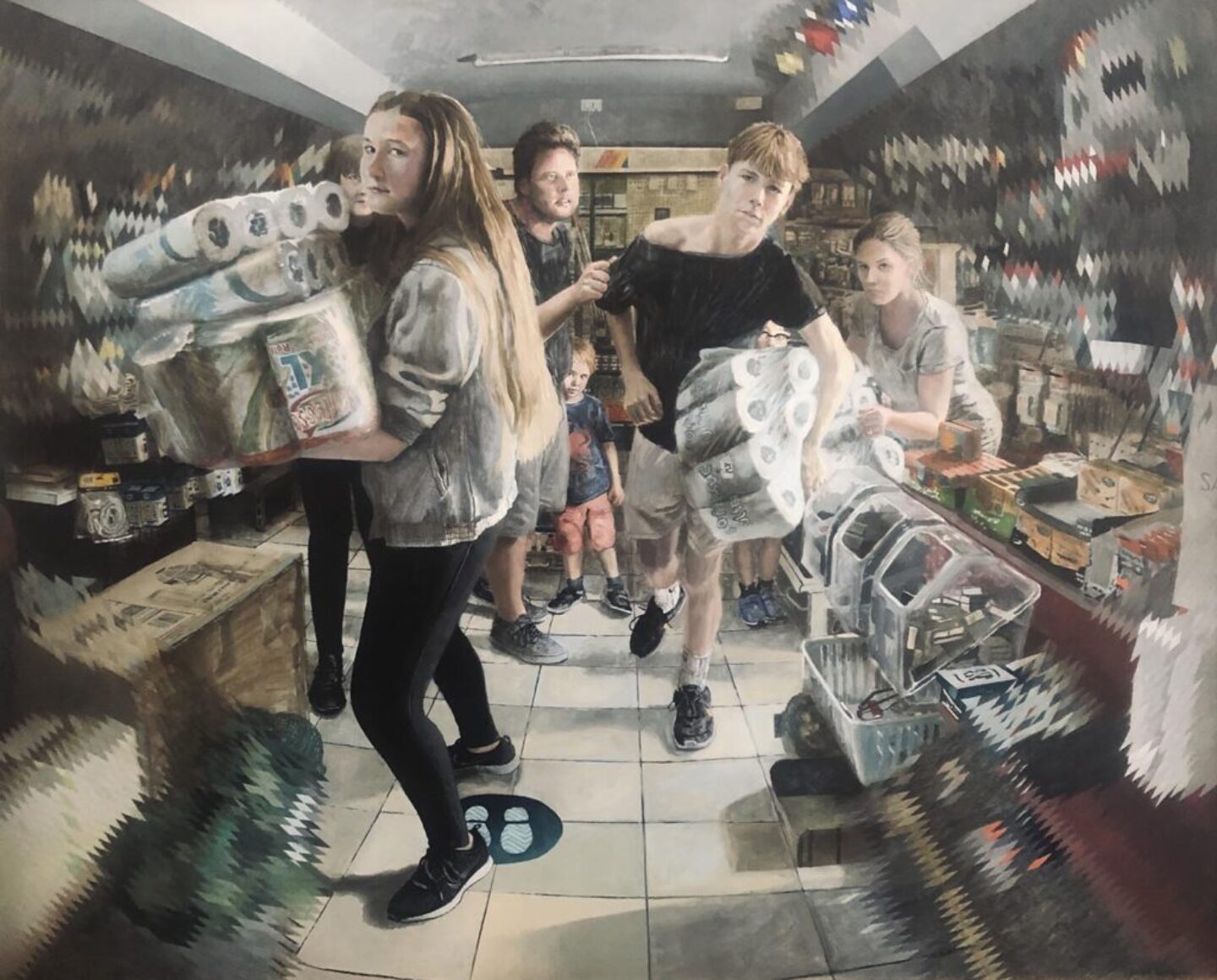 The Age of Panic

The Age of Panic – Oil on panel – 115 x 143cm The Age of Panic is a painting project by Will Teather, exploring consumerist hysteria. These modern reimagings of baroque imagery depict modern day dramas such as panic-buying. The works are intended to explore the emotional attachment and passions surrounding objects of desire within late-capitalism, from loo roll to Adidas, and the way shopping acts as a gateway to our wider emotions.

Behind the painting process…

I often try to create compositions that convey a sense of otherworldliness through the subtle distortion of perspective, yet also evokes a sense of nostalgia through their old-world painting techniques. This painting of the singer Ana Silvera uses similar techniques to my recent works for the Age of Panic.

Whilst I always like to do studies from life to familiarise myself with a sitter’s features, a very detailed painting like this tends, for convenience, to be developed with the aid of reference photographs. I took a series of shots of Ana, both in the studio and around my home city of Norwich, where we visited a curiosity shop tucked up a side alley of the historic Elm Hill.

The painting was created with the aid of about a hundred photographs, most of which were taken in situ at Elm Hill Antiques and Curios, both on the day that Ana came and during some later visits which I made as my ideas developed. Some of these photos were turned into a collage which formed the basis of the final composition. This gives the painting a nice higgledy piggledy sort of feeling: the more you study it the less that things seem quite right: the curve of the paving stones, the way the table tips off the edge of the frame, or the fact that the beams of the ceiling are almost facing you. It combines countless perspectives much in the way that an eye does as it travels around a room. I’ve subsequently found out that this kind of technique was pioneered by David Hockney in his photo-collage works, although I would prefer to align it with the work of a group of earlier German painters that originated the magical-realist mode of painting. Their work was described by the critic Franz Roh as presenting a “mildly transfigured reality,” and a key feature of this was a disregard for traditional and realistic perspective. This is particularly evident in the 1920s paintings of Otto Dix, where floors are upturned and shadows fall at unusual angles bringing a sense of the uncanny to the works. 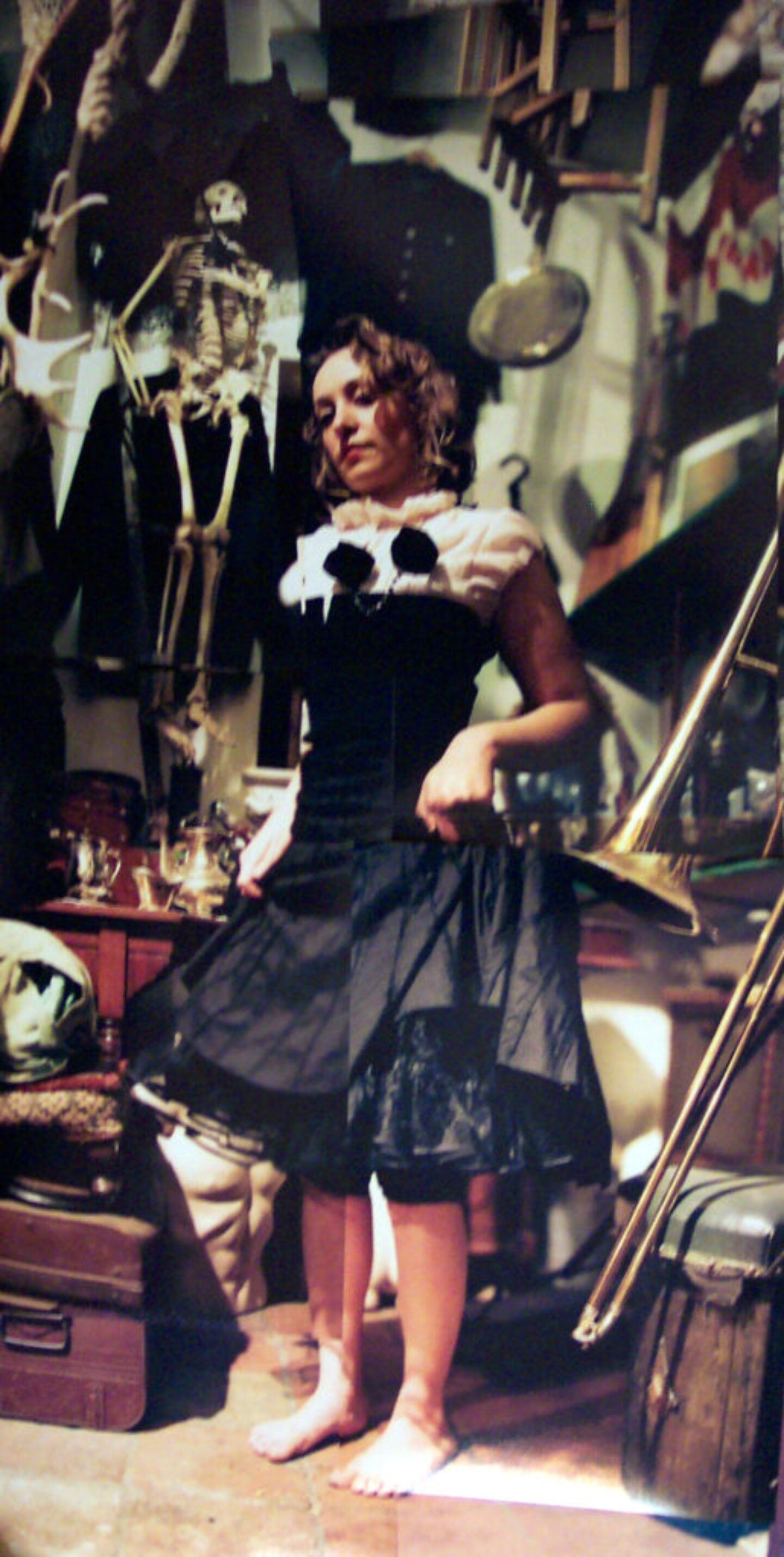 Once the initial collage was completed, and Ana had given it the go ahead, I prepared a primed panel with a mid-tone ground of grey/green acrylic and drew the picture out in as much detail as possible. I then completed an under-painting using thin layers of acrylic. The only colours used in this stage were a creamy white for highlights and a black mixed with turquoise for the shadows, with the grey/green ground forming the middle tones. Under-paintings are useful for giving a general tint to a final image and I chose this palette to imbue the portrait with a calmness and sense of nostalgia. I worked with acrylic diluted to the consistency of milk for most of this stage, using broad washes for larger areas, whilst using a fine brush to hatch some of the gradations within the skin tones. 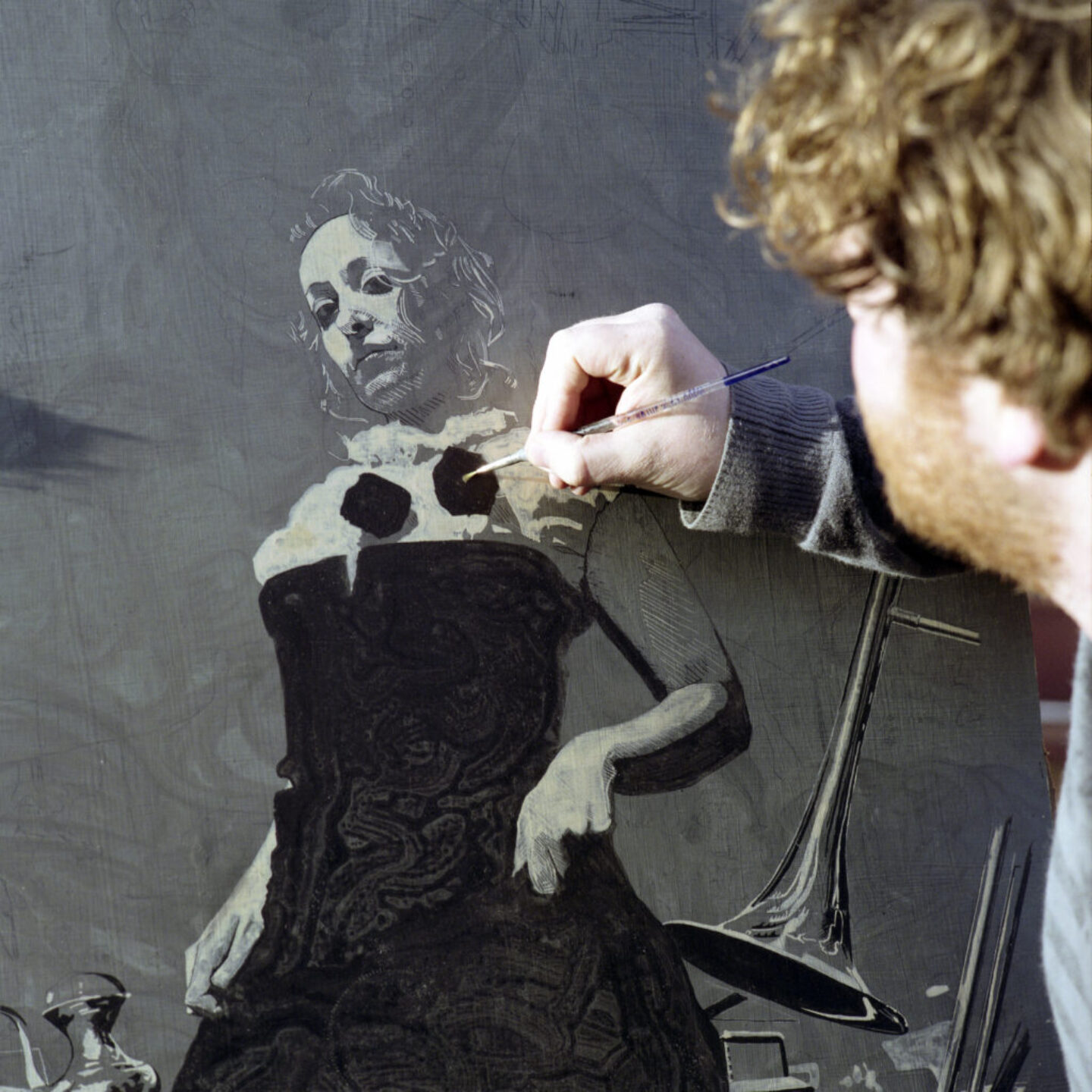 Once I had established the basic tones, I started over-painting more colours across the image. These washes were kept translucent with water so that the tones and hues of the under-painting were not lost. Lying the panel flat, I varied the consistency of the mix of acrylic to water across the dress to achieve a marbling affect that helps the fabric to shimmer. For smoother glazes such as those over the arms and face, I added a little acrylic glazing medium to help the paint go on evenly, helping to represent the luminous glow of her skin. The varied tone of the tiles was achieved by mixing a lot of different colours together wet into wet, keeping the paint very dilute and leaving it to dry afterwards overnight.

4.The Details and Highlights

I then started adding detail to different parts of the image in more opaque colour. I also continued drawing in additional elements that add interest to the composition, such as the photo of the little girl in the corner who maybe relates to the protagonist’s past. A gilded frame in the top right of the background contains the doves from an earlier picture of mine, called 11pm to Stonehaven. I brought almost everything within the image to a similar level of clarity, with objects brought into sharp focus around the protagonist. There is a distinct crispness that can be achieved when working with acrylic on panel, due to its smooth surface and lack of tooth.

This level of detail across the image relates to another artist identified as exemplifying early magical-realism; Alexander Kanoldt. In Kanoldt’s paintings, all the objects are given equal significance in the composition. The clarity and lack of emphasis on any one object is often said to provide the distinct magical aspect to his paintings.

As the portrait entered its final stages I reworked the tones across the image. I enhanced the sense of contrast between the light and shade in areas that are foregrounded, whilst letting items that are further away from the viewer sink back more into mid-tones. This principal is known as aerial perspective, and reflects the way nature scatters light across distances, meaning that the further away something is, the less contrast that it possesses.

I added the skeleton last since I knew that Ana didn’t want it to be too dominant within the painting. She has a photograph of the painting without the full skeleton for use on her EP. To make it enter into conversation with the rest of the composition, I made the skeleton look as if it was somewhat mimicking her posture.

With thanks to Norwich Arts Centre and Arts Council England for supporting this project.